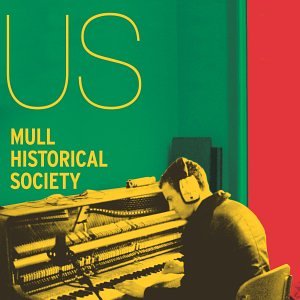 Colin MacIntyre, aka Mull Historical Society, the one-man-band songwriter, multi-instrumentalist and producer, has released 3 worldwide critically acclaimed albums under the `Mull Historical Society' pseudonym : Loss(2001), Us (2003) amp; This Is Hope(2004). So far Colin has achieved 4 UK Top 40 Chart hits and 2 Top 20 UK Chart albums. Colin has also been named Scotland's Top Creative Talent at the Glenfiddoch Spirit Of Scotland Awards. Colin has recently completed album 4: 'The Water', with Lemon Jelly's Nick Franglen producing. He will now be releasing and performing under his own name. This name change does not reflect any artistic changes. The Water is released Feb 2008.

Q Magazine said of "Loss": "Sumptuous choruses amp; choirs - Time to apply for membership." Uncut : "One of the best British records of the year." The Face : "A Tarten-clad debut of aspiring proportions." Time Out : "Mull is a beacon of originality in a tiresome sea of dross." The Guardian : "MacIntyre is a major new British songwriting force." NME: "One of the albums of the year. 8/10. All hail Colin!"

Mull Historical Society is the alias for one manband Colin MacIntyre. His second album, Us, could be seen as his Pet Sounds, especially as the resolutely sunny choruses and quirky sounds of his debut album, Loss, pegged him as the Inner Hebrides' answer to the Beach Boys. Where once bric-a-brac accompaniments lent idiosyncratic charm to his sweetly optimistic take on the trials of small-town life, here he creates magical landscapes. Even without the cosseting arrangements, the cosily swaying "Oh Mother" and "Clones" would be beautifully tender. "Live like the Automatic's" would be a rousing, headlong charge and the tear-stained "Don't Take Your Love Away from Me" would no doubt still have a tragically hopeful ring. But wrapped in an unobtrusive, yet fantastically sensual blanket of Beach Boys harmonies, swirling organs, tubular bells, plaintive pianos, woozy strings and twinkling harps, the innocence of MacIntyre's tunes is turned from twee to beguiling. With an ease of pace and heart-warming glow that's about as divorced from the grim trudge of reality as anything can be, there's nothing better to daydream to. --Dan Gennoe -- Amazon Review March 2003

The Center for Khmer Studies (CKS) promotes research, teaching and public service in the social sciences, arts and humanities in Cambodia and the Mekong region.

Provides the largest public library outside the capital, Phnom Penh, with over 20,000 monographs, books and journals, and with publicly accessible computers.​
MORE

Support the research and education of junior and senior scholars from Cambodia and overseas.​
MORE

The East-West Center Graduate Degree Fellowship (GDF) provides funding for up to 24 months for Master’s or Doctoral degree study for graduate students from Asia, the Pacific, and the U.S. to participate in the educational, residential, and leadership development…

Call for Contribution of Ideas: Extraordinary Chambers in the Courts of Cambodia (ECCC) Residual Functions Related to Victims

Read this announcement in English

Read this announcement in Khmer

The Center for Khmer Studies Scholar-in-Residence Program offers one long-term fellowship to support and encourage top-quality research and writing on Cambodian history, society and culture, politics, arts, economics, and other topics related to Cambodia, as…

This webinar was recorded on September 17, 2021 Abstract

Anthropologist Elena Lesley will be joining Anthropologist and CKS President Eve Zucker on a webinar to discuss Lesley’s work on trauma and memory in the aftermath of the Khmer Rouge.…

We are grateful for our partners

Thank you
for subscribing.