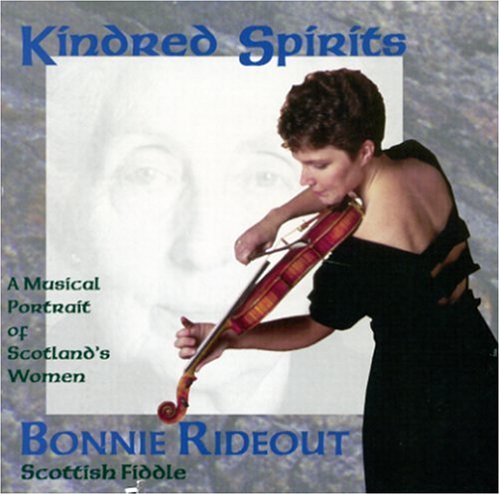 "... An unqualified triumph of inspiration and musicianship." -- WOMEN TODAY

"Her playing is so intensely personal and emotional that one feels like an eavesdropper." -- The Herald (Scotland)

Excerpt from the CD liner notes by Bonnie Rideout: It has been my desire to create a musical portrait honoring the contributions, great and small, that women have made tot he Scots culture over the centuries. Most of the music is written by men who were inspired by women. The titles portry women of all social levels.They are not just lovers, but patrons, employers, connoisseurs, drunkards and cheats. On the final track is an original piobairedch-I wrote it as an eulogy to Scots women who have passed on the legacy of honest hard work and pride in their own traditions: a legacy which has served to nourish the human spirit.

Bonnie Rideout, one of the most talented and celebrated Scottish fiddlers of our time, has amazed and enchanted audiences from Scotland's Edinburgh International Festival to America's Kennedy Center. With her unique style of fiddling,vast knowledge of traditional Scottish dance tunes, Highland bagpipe music, and ancient Gaelic melodies, and the resurgence of interest in Celtic music, it is not surprising that Ms. Rideout has moved to center stage. Rideout is the only American to hold the honor of representing Scottish fiddle music at the prestigious Edinburgh International Festival. She is the first woman to hold a national Scottish fiddle title and the youngest to have won the U.S. championship, winning it for three consecutive years. She has been featured on the BBC, CBS Sunday Morning, and NPR's Performance Today, Morning Edition and The Thistle and Shamrock. In addition to authoring eight music books for the Mel Bay Publishing Company, Bonnie's has recordings on the Maggie's Music record label which include: Scottish Reflections;Scottish Fire; Parent's Choice Gold winner- Gi'me Elbow Room; Scottish Rant with world champion City of Washington Pipe Band; Kindred Spirits; Celtic Circles ,Soft May Morn. Her Christmas recordings are: A Scottish Christmas (with Maggie Sansone, AL Petteway and guest piper Eric Rigler) which became a New York Times "Top Ten Holiday Best Seller" and has continued to sell in record numbers since 1996 and on BMG- the worlds' first "Scottish Christmas" DVD featuring her national touring ensemble.