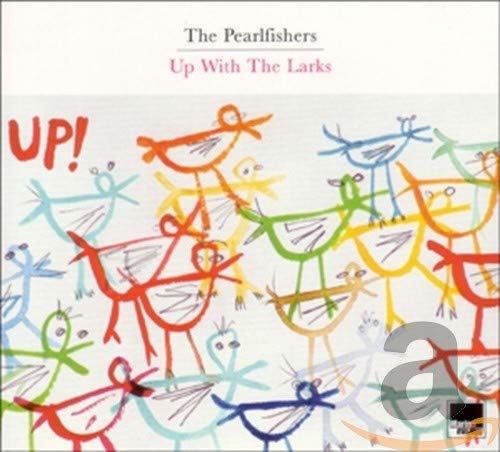 After an extended hiatus, Glasgow's The Pearlfishers return refreshed and improved with Up With The Larks, their sixth album for Marina Records -- the latest in a line of orch-pop masterpieces. The album is clear evidence that main Pearlfisher David Scott continues his unique musical journey with renewed joy and verve -- and that classic songwriting and well-crafted arrangements are alive and well in 2007. Joyous title track, "Up With The Larks" starts it off, rich with lush vocal harmonies, multi-layered guitar texture, the wild jangle of a battered upright piano and exquisite melodic twists and turns. Teenage Fanclub's Norman Blake co-produced four of the album's cuts, starting with "The Bluebells" -- a beautiful, string-laden rumination on the turning of seasons. "Womack and Womack" recalls Scott's early days running with the hawks of the major music industry and "Ring The Bells For A Day" is complete with the glittering Big Star chime of massed Fender Stratocasters. The Pearlfishers' 2006 Japanese tour with BMX Bandits is thrillingly recounted in "The Umbrellas Of Shibuya," a song which references Michel Legrand's classic movie opera, The Umbrellas Of Cherbourg, but locates itself in a Tokyo rainstorm -- with neon puddles, painted in Morricone banjos, Sakamoto synth blooms, Nilsson mouth music and, most tellingly, Scott's truly unique sense of melody and structure. Another highlight is the Randy Newman-esque "With You On My Mind," which sounds like a lost Tin Pan Alley classic arranged by Van Dyke Parks. "London's In Love" could be the theme song to an as-yet-to-be-made romantic comedy blockbuster, set in the "blue black air" of Britain's capital, full of promise and heartbreak. The Pearlfishers, firmly rooted in the classic tradition of three-minute cinematics as pioneered by Webb, McCartney and Rufus Wainwright, reach a great finale with the album's closing songs: "Blue Riders On The Range," a sparkling widescreen epic (sounding like Marvin amp; Diana doing Ram) and the gorgeous, pastoral "I Just See The Rainbow," which ends the album on an optimistic note.

This is an absolute delight, confirming David Scott as one of the pillars of Scottish pop. -- SCOTLAND ON SUNDAY, October 7, 2007

American democracy is in the midst of a waking nightmare, says Rick Hasen. And Democrats aren’t taking it seriously enough.

The candidate's struggles reminded female politicians in Germany that even after 16 years of Angela Merkel, the country has a long way to go.

The party never actually agreed on an agenda, even as Biden moved aggressively with the slimmest of margins in Congress.

He and his enablers really are a threat to democracy. But that isn’t because he’s so powerful.

The Biden administration’s response to the migrant crisis comes straight from Trump’s playbook: try to deter more from coming. It’s not working.

On the front lines, both parties are anxious about the storm that’s coming.

The end never actually comes but we love to obsess about it anyway.

The bill isn't too big to fail, but big enough potentially to fail spectacularly.

It might sound like a constraint on the executive branch, but the debt limit was originally intended to give more, not less, authority to the president.

It looks like they’re giving up, but for politicians like Anthony Gonzalez, a party run by Trump is not worth fighting for.

The Treasury Department is expected to exhaust its borrowing power in the next few weeks, triggering a harrowing debt default unless Congress acts quick.

By Sarah Ferris and Heather Caygle

Joe Biden, welcome to the thunderdome

The president spent the weekend working the phones in hopes of getting his party to pass his domestic agenda.

The mayor's "Summer of Bill" is officially over.

Key aspects of the economy are doing better than before the pandemic, which supporters say shows how government spending can help.

Protracted power struggle ahead as Social Democrats and conservatives fight for Merkel’s mantel.

"If he hadn’t tried to kill a president, he would have been in unconditional release long, long ago," U.S. District Court Judge Paul Friedman said.

By Josh Gerstein and Kyle Cheney

By Jennifer Scholtes and Caitlin Emma

By Burgess Everett and Marianne LeVine

‘The No. 1 issue’: Trump whips up election falsehoods after flawed Arizona report

The tangled tale of the Israel consulate, the Dilbert cartoonist and the Matt Gaetz case

Opinion | The Roots of Democratic Disarray

Jan. 6 investigation accelerates as it turns toward Trump

Texas governor to Border Patrol agents under investigation: ‘I will hire you’

Exclusive news, intelligence and tools for professionals on the front lines of policy. Learn more »